Ustad Rashid Khan.
Khan's majestic voice and his strong sense of melody ...... One of the exponents of the of Hindustani classical music,Ustad Rashid Khan songs to download as well as compilations such as greatest hits and rare ...Shyam Kalyan by Ustad Rashid Khan,Raag which haunted me..years back when Ustad Raffique khan played on Sitar!..'4shared' has this song to download.Please do listen to the Track for free and download it !
here you go...!
http://www.4shared.com/file/28506487/422b277/RAGA_SHYAM_KALYAN.html?s=1
Posted by Sandeep Sagar at 10:01:00 AM No comments: Links to this post

Email ThisBlogThis!Share to TwitterShare to FacebookShare to Pinterest
Labels: Listening to.. 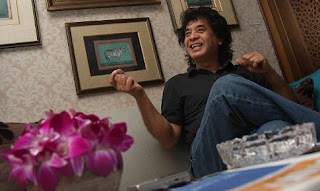 A pair of drums. It consists of a small right hand drum called dayan (literally means right) and a larger metal one called bayan (literally means left).
Undoubtedly the most striking characteristic of the tabla is the large black spot (called siyahi) on each of the playing surfaces. The siyahi (Siyah literally means black) is mixture of gum,syahi powder..... Its function is to create the tone timbre that is the characteristic of the instrument.Apart from a pecussion Instrument, its Barriers widened allover the world of jazz,morethan that! The invention of tabla and many other instruments is attributed to Amir Khusru.There is a tendency to attribute the development of almost everything to him. Anyway it is unfortunate that the history of the beginning of tabla is still in dispute.Let it be like That!
Posted by Sandeep Sagar at 9:26:00 AM No comments: Links to this post