Once in a great while, there emerges a musician who, through his genius, injects that

certain spark necessary to elevate an instrument to another level of expression and
appreciation. 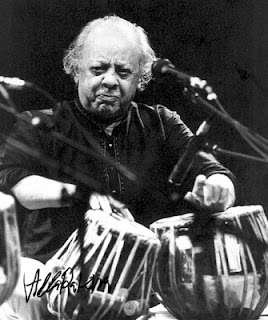 For tabla, ..Ustad Allarakha was such an artist, having brought his instrument a stature and respect never before enjoyed. A disciple of Mian Kader Baksh, the great guru of the Punjab gharana, Ustad Allarakha was, in his lifetime, the most celebrated exponent of this style. 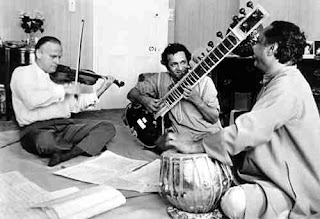 Ustad Allarakha was born in 1919 in Phagwal, a small village in Jammu, the eldest son in a family of seven brothers. From his childhood, it was clear that he was special. Though his family were all soldiers and farmers, his interests lay elsewhere. For hours he would watch the travelling natak company perform their dramas, especially interested in the tabla player performing with the company. At other times, he would sit by the river, seeing a face on the water, and a voice inside him would tell him to seek this man out. 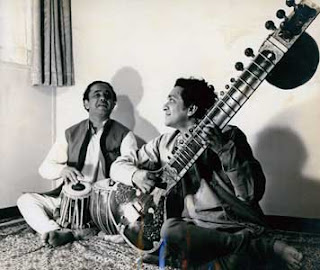 This inner voice, at the age of eleven, led him to Lahore where he met the man with the face in his dreams.  Mian Kader Baksh then became his guru and began his formal training in the art of tabla playing.
Soon the young Allarakha became the toast of every musical gathering in town and was offered
a post at All India Radio, Lahore, where he worked for six years, after which he was
transferred to Delhi and then to Bombay. Since Allarakha had also received extensive vocal
training from the legendary Patiala guru, Ustad Aashiq Ali Khan, he arrived in Bombay
prepared in both the rhythmic and melodic aspects of music.


In Bombay, his talent as a composer brought him in touch with the film world where he scored music for over twenty-five films with great success. He had many silver jubilee hits like "Maa Baap", "Ghar Ki Laaj", "Sabak", "Sati Anusuya", "Khandan", "Madari", "Alam Ara", "Jagga", "Bewafa" and many others. This, however, did not take him away from his tabla.


He continued performing in major festivals all across the country and eventually chose to give up films and exclusively pursue his classical career. As an accompanist, he enjoyed a rare versatility, being equally at home with vocal music, instrumental music, Kathak dance, and as a soloist. His thirty-year association with Pandit Ravi Shankar was well known for its hallmark accomplishment of bringing Hindustani music to the far corners of the world, receiving the highest accolades from audiences and critics abroad.

His consistently brilliant performances made the tabla a familiar percussion instrument the world over. As a performer, Ustad Allarakha was famous for his improvisations, his exceptional qualities of freshness and proportion, and his exquisite tone production effected by a technique which he continued to refine until his death. Moreover, he developed a playing style which is a virtual reference for tabla players of the present generation. 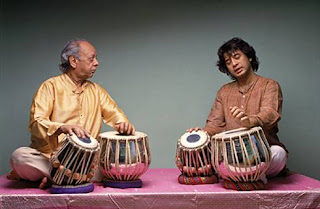 He was the recipient of many awards and titles including Padmashree, the Sangeet Natak Akademi Award, the Indo-American Achievement Award, the Maharashtra Gaurav Puraskar and a first-ever gold disc for a classical recording, to name but a few.


In 1985, he founded the Ustad Allarakha Institute of Music to train young tabla players in the tradition of the Punjab gharana. Also at this time, his duet performance, always popular in India, with son and chief disciple, Zakir Hussain, grew to international prominence with regular world tours. He toured worldwide with Zakir, and also in trio with his younger son Fazal Qureshi, until 1996, when he decided to limit his touring to India. For the last four years of his life, he concentrated on teaching and traveled often in India, usually to
accept awards and appear at major classical festivals.


His rapturous tabla solo performances still in demand, he continued to perform until the end of his life.
Ustad Allarakha died on February 3, 2000, truly one of the most pivotal and influential artists to have emerged from India in our time.

It was a special occasion for Zakir Hussain and wife Antonia Minnecola, which was made even more beautiful with the presence of some special people around. 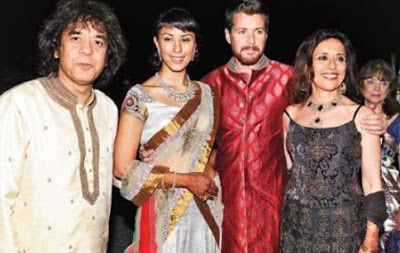 It was Zakir's daughter Anisa Qureshi's engagement to Taylor Phillips and the entire music industry tuned up to bless the happy couple. Zakir's brothers Taufiq Qureshi and Fazal Qureshi graciously welcomed the other guests who dropped in. 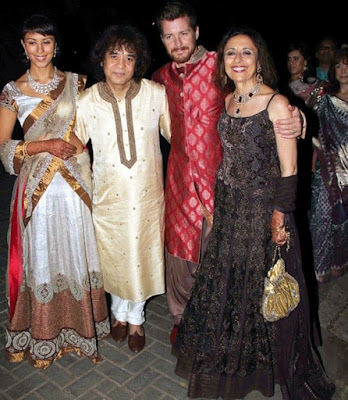 Sivamani was in his usual affable mood, while Pankaj Udhas was seen with his wife Farida. Rahul Bose met Pankaj at the entrance and the two were seen catching up with each other. Though Suleiman couldn't make it, Salim Merchant was there to greet the couple. Also spotted at this lovely occasion was Sitara Devi, Durga Jasraj, Pandit Hariprasad Chaurasia, Pandit Satish Vyas, Javed Akhtar and Shabana Azmi and Jagjit Singh.
Posted by Sandeep Sagar at 10:47:00 PM No comments: Links to this post

The Vilappilsala Cry
The Vilappilsala Waste Treatment Plant has been talked about a lot since its inception in 2000. Now, the Vilappilsala Grama Panchayat has taken a decision to shut down the plant.
The environmental damage and the pollution caused by the leakage of leachate from the plant have been a cause of concern for the residents of Vilappilsala. It has also resulted in the pollution of the water in Karamana River with the leachate flowing into it from Meenampalli Thodu.
It has been almost ten years since the garbage treatment plant at Vilappilsala became operational, which proved a boon to the residents of the capital city. ...
Contamination confirmed
Meenampalli ‘thodu’ deserves a better fate. For years, it has been the source of drinking water for a village - Chowalloor. It joins the Karamana river, which now appears to have dumped its green colour permanently for the poisonous black. The Vilappil grama panchayat, by crying for the closure of the waste treatment plant at Vilappilsala, has once again shed light on the pathetic plight of this dying river.
Posted by Sandeep Sagar at 11:12:00 PM No comments: Links to this post