Tendulkar's blood to be used in autobiography 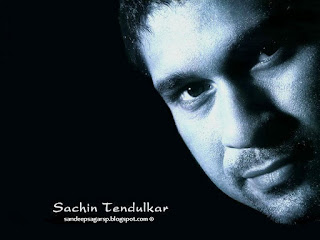 Sachin Tendulkar is all set to cross a new boundary, as a book publisher brings out a special edition of his autobiography made with the Indian master blaster's ''blood''.The special edition of the 'Tendulkar Opus' is coming out in February, with 10 copies being printed using his blood.The book, which includes unpublished family pictures and Tendulkar's thoughts about his career, weighs 37kg,measures half a metre square and stretches to 852 pages edged in gold leaf, costing 75,000 dollar.'The signature page will be mixed with Sachin's blood - mixed into the paper pulp so it's a red resin. It is what it is - you will have Sachin's blood on the page,'' publisher Kraken Media's chief executive Karl Fowler was quoted as saying by 'The Guardian'.
As well as taking blood from Tendulkar, Kraken asked for a sample of his saliva and used this to create his DNA profile, which will be printed on a two-metre gatefold in the book.
All proceeds from the sale of the 10 copies will go to Tendulkar's charitable foundation to help build a school in Mumbai.Kraken will also publish around 1,000 copies of a cheaper edition of the autobiography at 2,000 dollar-3,000 dollar.
Signed by Tendulkar, this edition will also be a half-metre square in size and will contain around 75 per cent previously unpublished material about the cricketing star, as well as his DNA profile - but not his blood.
It is also releasing a 200 dollar-300 dollar smaller edition of the book.
''We're publishing next February, in time for the cricket World Cup, which is being held in India. It's perfect timing,''said Fowler. ''He's never done an autobiography before and has a great story to tell.''

Tendulkar is the first cricketer to be given the Opus treatment.
Posted by Sandeep Sagar at 9:30:00 AM 3 comments: Links to this post