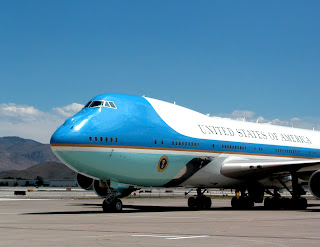 A Boeing C-17 Globemaster III of the US Air Force landed at the Air Force technical area in Palam on Thursday, sources said, adding that it had come to offload security equipment before the arrival of the Obamas.

Regular air passengers, however, can only expect delays on Sunday. The Air Force One will touched Delhi at 3:30 pm, along with 18 other aircraft of the US Air Force. As only two of the aircraft fleet parked at the Palam Air Force area, authorities at the Indira Gandhi International Airport are now clearing parking bays to make room for the remaining 17 support aircraft.

The Ministry of External Affairs has already issued a letter in this regard to Delhi Airport authorities, sources said. Meanwhile, security agencies are feeling the heat as aircraft already stationed at the hangar and apron have to be removed, considering the protocol requirement of the highest category security cover for the US President.

The White House will, of course, stay in Washington but the heart of the famous building will move to India when President Barack Obama lands in Mumbai on Saturday.
Communications set-up, nuclear button, a fleet of limousines and majority of the White House staff will be in India accompanying the President on this three-day visit that will cover Mumbai and Delhi.
He will also be protected by a fleet of 34 warships, including an aircraft carrier, which will patrol the sea lanes off the Mumbai coast during his two-day stay there beginning Saturday. The measure has been taken as Mumbai attack in 2008 took place from the sea.

Arrangements have been put in place for emergency evacuation, if needed.
Obama is expected to fly by a helicopter — Marine One — from the city airport to the Indian Navy’s helibase INS Shikra at Colaba in south Mumbai.

From there, he will drive down in Lincoln Continental — the Presidential limousine — to the nearby the Taj Hotel.
Two jets, armed with advanced communication and security systems, and a fleet of over 40 cars will be part of Obama’s convoy.

Around 800 rooms have been booked for the President and his entourage in Taj Hotel and Hyatt.

The President will have a security ring of American elite Secret Service, which is tasked to guard the President, along with National Security Guards (NSG) and personnel from central paramilitary forces and local police in Mumbai and Delhi.
Similar arrangements will be in place in Delhi, with the Air Force One to be kept in all readiness throughout Obama’s stay here from Sunday afternoon to Tuesday morning.

Maurya Hotel, where the President will stay, has already been swarmed by American security personnel and protective measures have been put in place.

Security drills are already been carried out at the hotel as well as Rajghat, which he will visit.

MUMBAI: Commercial flights are likely to be delayed by at least an hour when Air Force One, with an escort of three aircraft and five helicopters, touches down at Mumbai airport on Saturday morning. Though officials have yet to receive communication on air-space closure, protocol calls for a gap six minutes during a VVIP visit.

No commercial or civil flight is allowed to land or take off three minutes prior to and after the scheduled time of arrival. In the US Presidents case, a longer hiatus between his aircraft and other flights is expected. TOI has learned that the Centre is considering extending it to ten minutes in order to secure the airport and the skies.

Even if the closure is for six minutes, one has to take into account the sheer number of aircraft in Obamas entourage, said an airport official. With nine aircraft, helicopters and planes, scheduled to land on Nov 6, air-space closure may last for at least 54 minutes.

After arriving at Mumbai airport, Obama is expected to fly to the air-base INS Shikra. “This means that we will have air-space closure for each VVIP aircraft that is landing and taking off. During this span, the movement of commercial flights will be highly restricted,” said a source.

Three officials who are familiar with the required protocol said the ministry was also considering increasing the gap between general flights and the VVIP entourage to seven or 10 minutes. 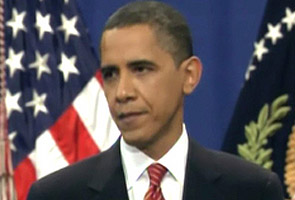